Showing posts from June, 2015
Show All

Is big business good for communities? 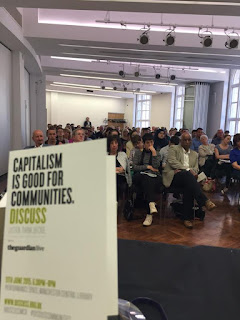 (Originally published by the Guardian)
Since the financial crisis, capitalism has been blamed for the growing levels of social injustice and inequality across the UK. While the 1,000 richest families have more thandoubled their incomesince 2009, average incomes are still lower than they were before the crash, leading many to argue that our system is failing ordinary workers and communities.
But is it all bad? Many business leaders believe that far from being to blame for society’s ills, capitalism is a positive force that fosters entrepreneurialism, creates jobs and allows communities to prosper.
At aGuardian Live debateat Manchester Central Library four panellists argued for and against the motion: Capitalism is good for communities. In a city that’s home to some of the most socially deprived areas in the UK, it was clear that those arguing in favour of the motion would have a tough task.
Breffni Walsh, founder of Brands Are Best, warned that blanket criticism of capitalism is harmf…
1 comment
Read more
More posts