Benny Wenda: ‘West Papuans are living in a prison’ 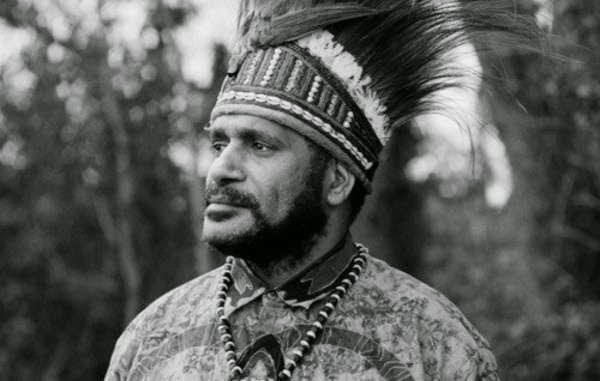 Last month, as Indonesians prepared to vote for a new president, dozens of West Papuan activists were reportedly attacked by security forces for urging local people to boycott the elections. Mischa Wilmers speaks to the exiled leader of the Free West Papua movement, Benny Wenda, about his lifelong struggle for justice and asks why nobody is talking about the territory he calls ‘little South Africa.'

If someone were to describe a brutal military occupation of a region whose people are routinely attacked for demanding their right to self-determination, it’s unlikely Indonesia would spring to mind as the oppressor. The western media continuously fawns over the progress made by the world’s 'third largest democracy’ since the fall of the Suharto dictatorship 16 years ago, the dominant narrative being that expressed by David Cameron when he visited the country in 2012.

“Indonesia has transformed itself in the past decade into one of the world's most important democracies, with a free media and elections,” he declared. “The military no longer plays a role in politics, but fulfils its proper role defending the country from external attack.”

In his speech Cameron announced plans for Britain to break its arms embargo with Indonesia, imposed by Labour in 1998 following the revelation that British-built Hawk aircraft had been used by Suharto to slaughter the people of East Timor. The following day BAE Systems and other arms companies began trading with the country for the first time in over a decade.

To many West Papuans, however, the description of Indonesia as a responsible democracy with a benign military is wildly inaccurate. Last month, as 180 million Indonesians prepared to participate in the country’s presidential elections, dozens of activists in West Papua were reportedly arrested and beaten by security forces for handing out flyers urging local people not to vote. Despite the threat of violence the West Papua National Committee (KNPB) estimated that around 80% of eligible West Papuan voters chose to observe a peaceful boycott. All of this went virtually unreported in the international press.

Benny Wenda, the exiled leader of the Free West Papua movement, was among those leading calls for the boycott. Granted asylum in the UK in 2003 after being persecuted by the Indonesian authorities, he lives in Oxford but retains close contact with friends and family who constantly update him with news from the region.

“My people are living in a prison and are discriminated against in many forms,” he protests, though the latest attacks are nothing new to Wenda who has been struggling to bring similar incidents to the attention of western governments for more than a decade. A search of the BBC website reveals just two articles referring to him – an indication of the lack of mainstream media interest in a region many in Britain have little or no knowledge of.

Yet his remarkable life story is worthy of far greater attention than it has received, serving as a poignant reminder of a forgotten colonial struggle spanning several decades of western backed exploitation and slaughter.

He was born in the West Papuan highlands in the 1970s, several years after the ‘Act of Free Choice’ – a vote to decide whether West Papua should relinquish its sovereignty to Indonesia - led to the annexation of the region by Suharto’s Indonesia. Despite the massacres that ensued, Wenda has fond memories of his early life in the highlands.

“When I was a little boy I would play in the forest and help my mum in the garden. I didn't have any fear, surrounded by nature,” he says, describing his short lived experience of childhood innocence.

In 1977 the military moved into his village, terrorising his family and raping his aunt in front of his eyes. In its recent report, 'the neglected genocide,' the Asian Human Rights Commission estimates that at least 4146 Papuans were killed between 1977 and 1978. As the UN stood by and did nothing, Benny’s village was one of those bombed by Indonesia following a rebellion by 15,000 highlanders. Those who survived fled to the jungle.

“Our house was burned down and the Indonesian military were killing my people,” he recalls. “At the time I didn't know what was going on but I just followed my mum and my dad. We tried to survive in the cold, at risk of malaria. I always asked 'why did we leave our village? Why are we here?'”

Wenda and his family hid in the jungle for five years before eventually surrendering to the Indonesian military and returning to their village. Shortly afterwards they moved to Jayapura, the provincial capital of Papua, where Benny grew up. But the questions that plagued him in the jungle persisted throughout his adolescence and it wasn’t until he embarked on a sociology and politics degree course that he came to understand the historical context of his suffering. “I started looking back at what happened in my village and I started to discover who I am…I didn’t know any of the history.”

His search began in the university library where he quickly found that books on West Papua were heavily censored. Then, in 1999 a German student with an interest in indigenous cultures introduced him to the internet. Online he discovered that West Papua had been a Dutch colony until 1962 when control of the region was temporarliy transferred to the UN. He read accounts describing how the Dutch had previously prepared West Papuans for independence and how in 1961 his forefathers had raised the Morning Star flag and sung the national anthem in anticipation of their sovereignty.

But the celebrations were premature. Eight years later the UN turned a blind eye as Suharto moved in and held a sham referendum in which 1022 tribal elders were selected by special forces and coerced at gunpoint into voting for an Indonesian takeover. A month before the vote, Frank Galbraith, the American ambassador in Jakarta, wrote in a secret memo: “possibly 85 to 90% [of West Papuans] are in sympathy with the Free Papua cause.” The 'Act of Free Choice' had in fact been an act of no choice.

What followed was the genocide Wenda witnssed as a child. It became apparent that over a period of three decades thousands of West Papuans had been massacred by Indonesia for the purpose of acquiring the region’s natural resources – including the world’s largest goldmine and third largest copper mine - all with the full support of Britain and the US. Armed with this knowledge he vowed to dedicate the rest of his life to liberating his people from colonial rule.

15 years on he remains true to his word. Last year he was nominated for the Nobel Peace Prize and although he is unable to return to his homeland he has become a global symbol of the West Papuan cause - much to the chagrin of Indonesia's ruling elites who launched an unsucesssful international arrest warrant for him in 2011. He has created a base for the Free West Papua movement in Oxford and has just opened a new office in Melbourne where he hopes to establish a strong presence despite Prime Minister Tony Abbott declaring that West Papuan activists are “not welcome” in Australia.

Though the Suharto dictatorship which bombed Wenda's village is gone, the current regime faces similar charges of exploiting the region for economic gain at the expense of West Papuans. According to the World Bank, Papua province’s regional GDP is 50% higher than the national average while the people living there are among the poorest in all of Oceania. Around 30% of West Papuans live in poverty - nearly triple Indonesia's national average of 12%.

Accusations of exploitation are not soley aimed at Indonesia. British Petroleum which has invested billions of pounds in the construction and operation of gas plants in West Papua has been accused of destroying forests, polluting rivers and employing workers from outside the region rather than creating jobs for local people. "The British have a big investment in West Papua," Wenda tells me, "they ignore my people and are operating in the middle of the genocide."

Those who complain are dealt with harshly by security forces. In its latest annual World Report, Human Rights Watch states that violent attacks (including killings and torture) on protestors are commonplace and estimates that approximately 70 activists are presently incarcerated for their peaceful involvement in the independence movement. In July five political prisoners were released after serving three-year sentences in a Jayapura prison. Their only crime had been to read out a “declaration of independence” from Indonesia at a rally in 2011. But these stories rarely make it outside of West Papua - a situation which is not helped by the fact that foreign journalists are heavily restricted from entering the territory.

“500,000 West Papuans have been killed since the Indonesia occupation and nobody knows what is really happening because Indonesia is able to ban the Red Cross, Amnesty International and all the media so they can get away with murder and discrimination,” laments Wenda. “I call West Papua ‘little South Africa.’ The apartheid regime is the same as what Indonesia are doing.”

Indonesia's newly elected president, Joko Widodo, spoke in support of indigenous peoples in the lead up to the general election. But Wenda's central demand is for Indonesia to respect West Papua's right to self determination under international law. He argues that the only basis for Indonesia's claim to the territory, the 'Act of Free Choice,' has been thoroughly discredited and that his people must be permitted to determine their own future with a new, fair referendum. Indonesia continues to resist these demands while the UN remains silent despite urgent calls from human rights groups for a Special Representative to investigate the situation.

While the "international community" continues to ignore Indonesia's abuses there is no doubting the magnitude of the task ahead for the Free West Papua movement. Yet Wenda appears remarkably positive, drawing inspiration from the likes of Gandhi and Mandela and from the experience of East Timor which obtained independence from Indonesia in 1999 - though not before a third of the population had been slaughtered.

The challenge is to capture the attention of the world before it's too late.

“I’m doing it, I’m campaigning and I know something will happen in the future," he says. "While my people are dying nobody can stop me. Not until they are free.”