George Galloway: 'Only a fool has no regrets and I'm certainly not a fool' 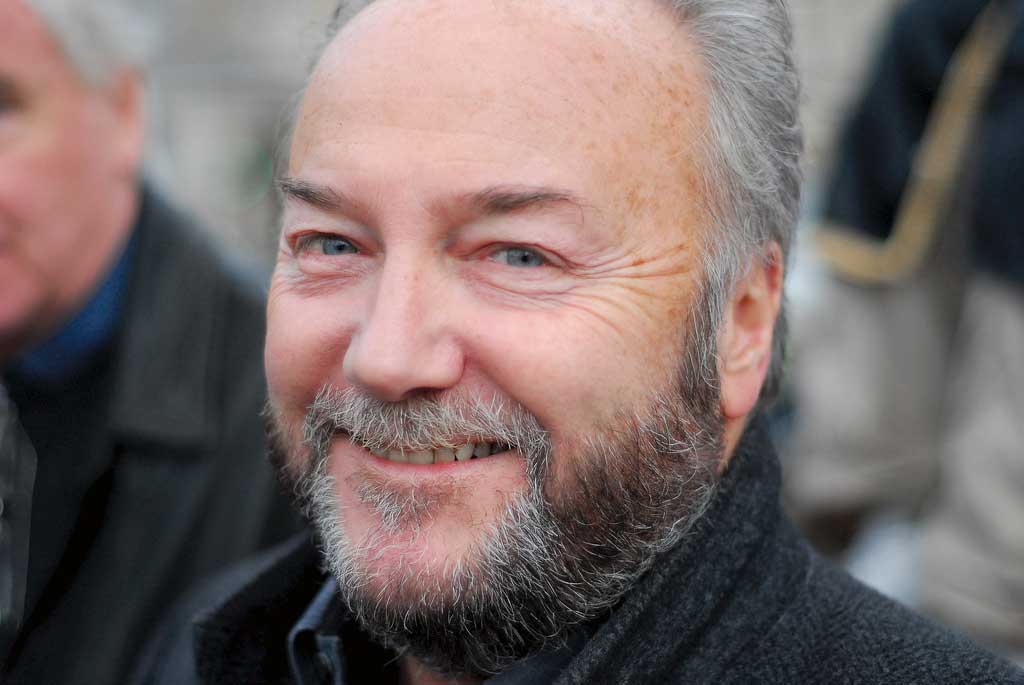 George Galloway looks as though he’s just rolled out of bed and into his constituency office in Bradford West. It’s 10am and I’ve just been informed the woman sitting next to me is booked into the same appointment slot as me. Wiping sleep from his eyes the Respect MP turns to introduce himself and swiftly resolves the problem. “Constituents come first,” he says wryly, and they disappear into his office for 10 minutes.

More than a year has passed since Galloway’s remarkable by-election victory here in 2012, yet glancing around the place one could be forgiven for thinking he’d moved in yesterday.  The walls are almost completely bare - save for an out of date, heart shaped Hugo Chavez election flier and a notice board with a “boycott Israel” poster pinned to it.

Anyone who watched his appearance on Question Time in June will have noted that while the youthful looks which once earned him the nickname “Gorgeous George” have somewhat faded, his sharpness of mind and oratory flair have not. He claims he may owe these talents to kissing the mythical Blarney Stone in Ireland as a young boy, though he often feels anxious ahead of big speeches and media appearances:

“The first question I always ask after coming off stage, to my nearest, is ‘how was that?’ To which sometimes the answer is ‘well you’re getting a standing ovation from several thousand people so how do you think?’"

Modesty is a trait rarely attributed to Galloway, but then again few politicians could claim to possess it. His innate confidence has both advantages and drawbacks. He makes regular appearances on current affairs programmes, boasts a huge audience of nearly 150,000 Twitter followers and his YouTube videos are among the most watched of any political figure in the world.

Two weeks ago a compilation package of his most entertaining moments became available for download on i-Tunes, and it’s worth listening to. At his best few can compete with him in a debate – even the late contrarian Christopher Hitchens struggled when they did battle over the Iraq War in 2005, for it was during the period shortly after the invasion of Iraq that he was at his most brilliant as one of Britain’s leading anti-war voices.

Yet with his reputation as a fierce and principled debater has come a level of fame he says he isn’t entirely comfortable with - a claim which may come as a surprise to those who remember his ill-judged appearance on Celebrity Big Brother. “You can’t eat your dinner for people coming across to get their picture taken with you. Or the opposite, you can’t eat your dinner because they’re glaring balefully at you,” he protests.

Then there is his relationship with the media - including the liberal press - who are largely hostile to his radical left wing politics. Over the past year Galloway’s detractors have been granted more than one field day. Last August it was his YouTube video on the Julian Assange rape allegations, in which he remarked to near universal revulsion, “not everybody needs to be asked prior to each insertion.” More recently he was accused of racism after a YouTube video showed him storming out of a debate with an Israeli, citing his opponent’s nationality as the reason for his exit.

Doesn’t it bother him that everything he says and does is scrutinised by journalists seemingly waiting for him to slip up?

“Sure, but on all the big political things I’ve been proved right and more and more people know that,” he counters. “Take this horrific murder in Woolwich, a couple of months ago I asked David Cameron if he would adumbrate the key differences between the throat cutting extremists that we’re killing in Mali, and the throat cutting extremists we’re giving money to in Syria. My argument is that fanning the flames of extremism, in some cases even paying the extremists and giving them weapons, is a disaster waiting to happen.”

Ever since Iraq and the 7/7 bombings, Galloway has been savagely criticised for making precisely this point.  Yet as with Iraq, public opinion polls suggest it’s an argument he is winning. The problem is that while many people broadly agree with him on the dangers of British intervention in the middle east, more than a few – including members of his own party – have felt dismayed by his sporadic outbursts on other issues. Salma Yaqoob, the former leader of Respect, stepped down from her post in August following Galloway’s rape comments in what was perceived to be a massive blow to the party. Galloway plays down its significance.

“It’s a very minor point. If you went out on the streets of Britain and asked people who Salma Yaqoob is, very few people would know who she was...”

Perhaps, but she is widely considered to be an extremely talented politician and speaker, I interject.

“Very talented, and I helped to encourage her, so on a personal level I feel betrayed by it. But on a political and public level I don’t think it’s very important at all. But personally yeah,” he concedes.

It’s difficult to escape the feeling that Galloway cuts a somewhat isolated figure on the left. Several former members of Respect were among a group of activists who recently set up a nationwide group called Left Unity, aiming to heed filmmaker Ken Loach’s call for a new left party. Galloway also appears to have been snubbed by The People’s Assembly, a growing anti-austerity movement supported by almost every noted left wing voice in Britain, from Owen Jones to Caroline Lucas.

“We’re the one that can win elections, the others cannot, and that’s our role,” says Galloway somewhat dismissively, before adding, “But we wish everybody on the left success in their endeavours.”

Surely he thinks it’s important for likeminded parties and organisations to work together towards a common goal, like countering austerity?

“Yes, but in the end you can only stand in elections as one party. I don’t think this Assembly – although I’ve not been to any, I haven’t been invited to any – I don’t think that they intend to become a party. But I don’t have a lot of confidence in the historic left organisations or personalities. I’ve had too much experience of them.”

His disillusionment with the British left doesn’t extend to his comrades in Latin America, particularly Venezuela and Cuba, with whose leadership he enjoys closer ties than arguably any other political figure in the UK. Part of the problem with the left in Britain, he says, is that they have become an unattractive proposition to ordinary people who might sympathise with their aims, but are put off by the squabbling and “internecine hatred.”

“If I went out onto the streets now and started marketing myself as “the left” I wouldn’t find many takers,” he says. Instead, for inspiration he recalls a conversation between two of his greatest idols.

“I was once, I’m glad to say, present at a conversation between Fidel Castro and Hugo Chavez, and Fidel Castro said to Chavez ‘stop talking about socialism, just do socialist things and then people will say ‘that was a good thing! What’s that called?’”

The passing of Chavez was a significant moment for Galloway, but he rejects the idea that the late Venezuelan president’s death marked the beginning of the end for socialism in Latin America. Chavez’s inimitable charisma will be a hard act to follow, he admits, but his successor, Nicolas Maduro can pull it off.

“He [Maduro] seemed to grow a foot taller at the funeral in terms of his presentation and ability to find the words and express them well, and I feel that he will continue the ideas of Chavez or, as the slogan goes, to ‘build the Venezuela that Chavez dreamed of.’

It’s fair to say only a select few of Galloway’s trusted comrades can expect to receive such high accolades from the Scotsman. Until recently though, his comments regarding Labour leader Ed Miliband made it seem like he might have formed a rather unlikely alliance back home. Following a meeting between the two in Bradford, Galloway told the London Evening Standard that he had found Miliband to be "quite impressive, physically and intellectually."

But the friendship was short lived. Under pressure from his party to explain his motivation behind the meeting, Miliband insisted they had merely discussed boundary changes, a claim Galloway then dismissed as a lie from “an unprincipled coward with the backbone of an amoeba.” Still, it seems puzzling that he was initially so charmed by a man hardly aligned with his political outlook.

“It’s about the flatness of the surrounding landscape.” He explains, “He stood out in the desert, only in that he was an inch or two higher than the surrounding landscape. He is better than the leader who went before, who was better than the leader who went before. So at least the direction of travel is in the right direction, but it’s very very slow and hasn’t gone very far.”

To those who suspect he would secretly like to re-join the Labour party which expelled him in 2003, his message is clear. On the issues that affect his constituency – the bedroom tax, the public sector pay freeze and all the cuts that have yet to be enforced - Labour, Galloway insists, have ceased to be a party representing the interests of the working class.

“I’ve always said and I say it again now: If the Labour party became the Labour party again, everybody on the left would have to re-evaluate their position. But I have absolutely no confidence at all that such a transformation will occur.”

Galloway doesn’t read any of the media criticisms of him because, he says, there simply isn’t enough time. Instead he relies on self-evaluation and the judgment of those within his inner circle. Before we part I ask him whether he has any personal regrets from his life in politics and for a second he looks as though he might divulge something, before swiftly remembering where I’ve come from - the media.

“Well it wouldn’t profit me or what I stand for to tell you that,” he smiles, “Just know that I have many regrets and that only a fool has no regrets, and I’m certainly not a fool.”

A cordial handshake later he rushes off to attend to more pressing matters, leaving me in no doubt where his priorities lie. After all, constituents come first.

*Correction. This article originally stated that George Galloway was present at the funeral of Hugo Chavez. This error has since been corrected.
Current Affairs Features