Caroline Lucas: 'The People's Assembly offers agenda of hope at a time of hopelessness' 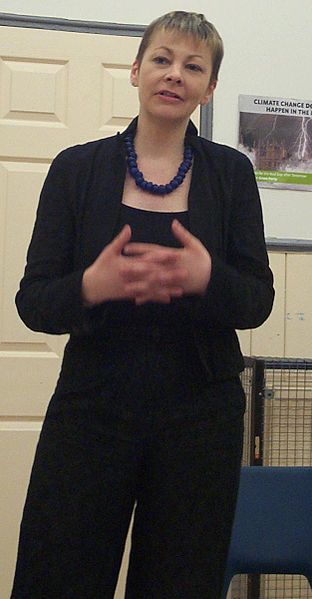 Aimed at mobilising millions of people against austerity, The People’s Assembly is a growing movement supported by a broad coalition of trade unions, organisations, politicians and journalists. On June 22 they will hold a large meeting with thousands of activists opposite the houses of parliament. Green MP Caroline Lucas talks to Mischa Wilmers about the positive public response following rallies held in cities across the UK, and her optimism on what the movement can achieve.


You’ve been speaking at rallies for the People’s Assembly including the one in Brighton recently. What has the reaction from the general public been like so far?

There has been an overwhelmingly positive reaction from the general public.  I think people are delighted to hear the views that they’ve been working towards being reflected back at them from so many different perspectives; whether that’s from unions or different people in the Labour party, Green party or no party.  You have journalists, economists; more and more people are challenging the austerity ideology that we’ve been hearing, not just from the government but sadly increasingly from the Labour front bench.  People want the confidence to believe that alternatives are possible.  One of the great opportunities for the People’s Assembly is to make that tangible, to demonstrate that alternatives are possible and to challenge the economics of the government.  Even the IMF is saying that at a time of deep recession, the idea that the best way to tackle the deficit is by reducing demand even more and cutting public sector jobs is completely the wrong way forward, that there’s been far too much austerity.  Through the People’s Assembly, we’re able to arm people with strong arguments, demonstrate that they’re not alone and increasingly to connect up all the different local campaigns that there are around the country.  It’s important that the Assembly doesn’t seek to duplicate what’s already happening, but I think we’re a body that can help join up all the energy and be greater than the sum of the parts.

An open letter published in the Guardian in February states that the Assembly will “provide a forum for anti-austerity views which while increasingly popular are barely represented in parliament.” How do you think this can be achieved in practice?

Well, I’m hopeful that the meeting planned for June 22 in London, which has already been hugely subscribed, will not just be a one off meeting, but the beginning of a process.  What that process will look like has to be decided by the individuals who are there.  At the minimum, we will identify the ways to connect up the different campaigns with something everyone can agree with in terms of what’s wrong with the government’s approach and the direction of a better way forward.  Hopefully we will attract more people to join us who may not be 100 percent convinced by the government’s line that there’s no alternative, but aren’t sure what the alternative is.  I think that applies to a huge number of people out there.  We have some very good economic voices on our side who are saying, yes, we need to address the deficit, but you don’t do it by throwing half a million public sector workers out of work – with the knock on effect that has on the private sector.  The Assembly offers an agenda of hope at a time when there is a great deal of hopelessness.  It’s important for people to hear that there is something different, and a positive agenda around investment in affordable housing or investment in the green infrastructure we need if we’re serious about tackling climate crisis.

Opinion polls suggest people are losing faith in the Government’s austerity programme. However there are still a significant number of people – backed by the right wing media – who disagree with your position and some are calling for even deeper cuts. Is the role of the People’s Assembly to persuade people to an anti-austerity position or merely to mobilise those already converted?

I would say it’s both. On your first point about those people who want greater cuts, I think we need to recognise that, for many on the right, this economic crisis isn’t really a crisis at all – it’s an opportunity for them to roll back the state.  There are plenty of people on the right who have never liked a strong state and who are seizing on the economic crisis as a chance to weaken it.  They use the constant refrain of what caused the economic crisis was too much borrowing by Labour, conveniently ignoring that what actually caused it was an international banking crisis.  So it’s not surprising that a lot of people feel confused, because some of the messages they’re receiving are completely disingenuous.  There is now a real opportunity, not only to mobilise people who would already oppose austerity, but to help with the strong arguments to demonstrate the bankruptcy of the pro-austerity camp.  As well as challenging the idea that a) it’s inevitable and b) it is to do with over borrowing, I hope we can also get information out about the money supply, because most people don’t know how money is created.  Take the $16 trillion that was found to bail out the banks globally a few years ago.  That wasn’t found through taxation and it wasn’t found down the back of the sofa – it was through a process of credit creation.  I think we need to have greater discussions and debates to better understand how credit creation works, and that it can work in our favour if we ensure that money goes directly into the economy and doesn’t just get made by central banks, then passed to private banks who speculate with it.

How important will it be for the People’s Assembly to synchronise with similar movements around Europe and internationally?

It was an international banking crisis and this is an international crisis – and although each country has very different circumstances, international solidarity and working together is absolutely crucial. Capitalism is international and people’s movements need to be international as well.  So we’ve spoken to organisations like the World Social Forum and demonstrated that there’s a real appetite for making those connections across borders.

You’ve also been working closely with the leaders of the Occupy movements. What do you think can be learned from Occupy and are there any areas that could be improved on?

What was positive about the Occupy movement was that it began to articulate alternatives to the status quo.  There was some criticism that it knew very much about what it was against, but not very much about what it was for.  I don’t think that criticism was fair, but to the extent that it may have taken a while to get closer to the positives, it is something to learn from.  We’re very much a People’s Assembly with positive proposals, as well as being against austerity.

Given the left’s history of division and squabbling, what would you say to the sceptic who might think this assembly is just more of the same?

Given that the issues on the table are so hugely important, I hope it will rise above party political posturing or point scoring. The rallies that have taken place around the country so far have included people of some parties and no party, and it’s crucial that we don’t slide back into party silos.  We need to be very mindful of that and I know, for example, when Owen Jones has been chairing his meetings, he cracks down on sectarianism of any kind.  Everybody seems to realise that what’s at stake here is urgent and important.

I haven’t witnessed a controlling influence of former SWP members in the meetings. Is it truly democratic? In a sense, no it isn’t yet because this is only the very beginnings of a coming together. It’s certainly not a top down thing – there is a genuine recognition that this has to be a bottom up process.