Amid the chaos of an early morning clash between inmates at Santiago’s San Miguel prison, two assailants proceeded to ignite their surroundings with a makeshift flamethrower. 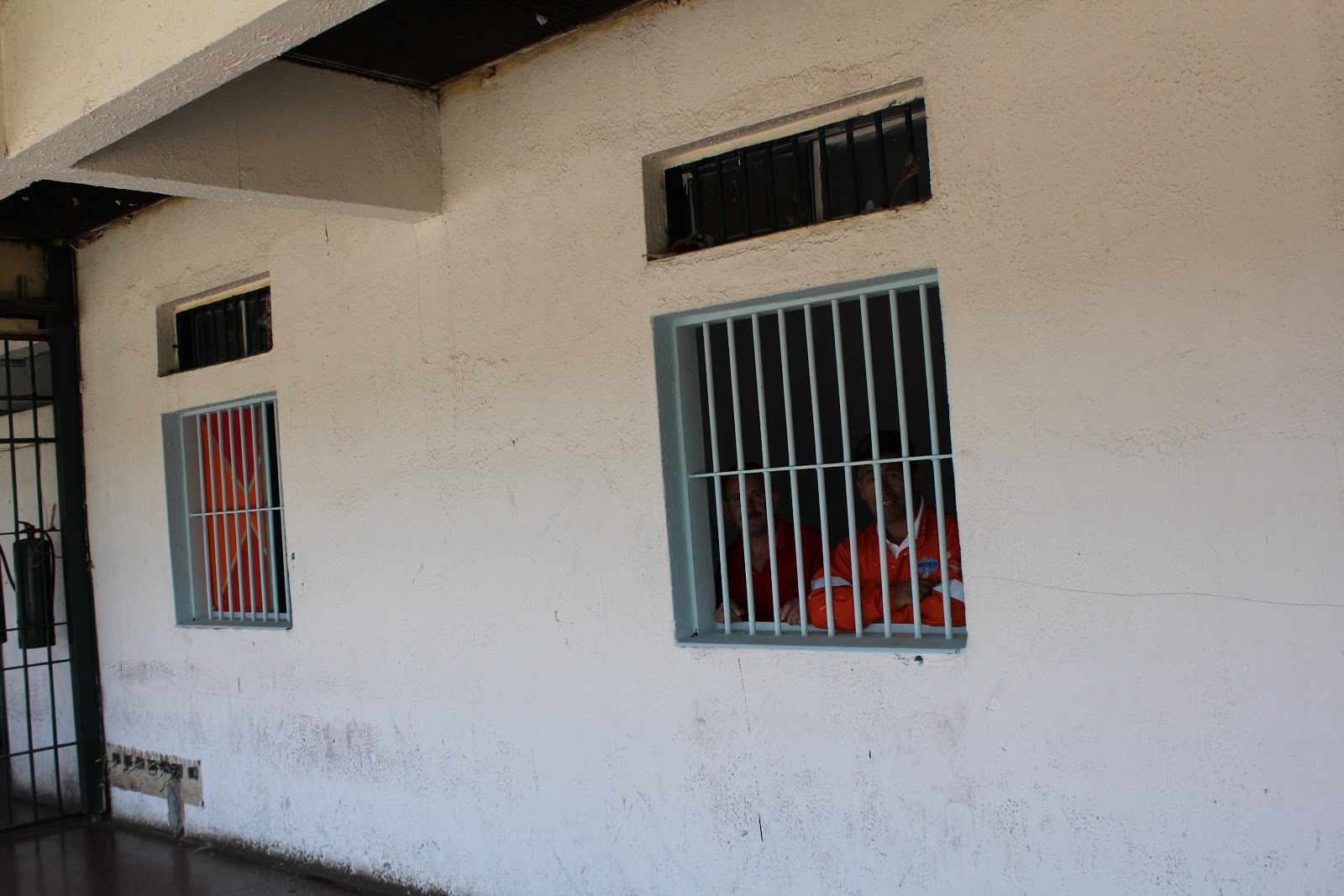 From his cramped cell on the second floor of Tower 5, Nelson Gonzalez could hear his friends scream: ‘I heard shouting coming from the cells upstairs; people were calling for help. At first we thought they were just messing around, but after a while we started to see smoke and realized something terrible was happening…’

Though the flames spread quickly, the prison guards were slow to react, leaving dozens of men trapped in the infernal heat. Hernandez was lucky, escaping unhurt from a tragedy which ultimately cost 81 lives and left 14 inmates suffering from severe burns.

A subsequent inquest found the guards on duty had been drunk on the morning of the fire, and acknowledged that the tragedy (the gravest in Chilean penal history) might have been averted had the jail not been at twice its intended capacity. San Miguel is designed to house 892 inmates, yet at the time of the fire 1,654 were incarcerated there, and overcrowding was prevalent in jails across the country.

That afternoon President Sebastian Piñera promised to improve the state of his country’s prisons. ‘Chile’s prison system is not worthy of a country that treats its people in a civilized way,’ he announced. ‘We cannot keep living with a prison system that is absolutely inhumane.’

But two years later, a tour of Colina II penitentiary, lying 22 miles north of Santiago, gives the impression that little has changed.

I am taken to the jail by Montserrat Flores, a recent design graduate and founder of an independently run rehabilitation scheme called Proyecto Importa. Flores practices yoga with the inmates and teaches them to design jewellery items which are subsequently sold outside the prison walls. She tells me hers is the only permanent rehabilitation project in the prison, but that due to a lack of resources only nine men are able to participate in it.

From the outside, there is little out of the ordinary about Colina II. A tall barbed-wire fence lines the perimeter of a giant concrete complex, punctuated by several menacing watchtowers. In the horizon the snow-capped cordillera mountains provide a contrasting backdrop. Through the gates, an intense faecal stench pollutes the humid spring air. Walking down the aisle we see dozens of inmates peering through the bars of their cells, packed in so tightly they can scarcely move. Getting from the entrance gates to her rehabilitation suite is a weekly challenge for Flores; the guards rarely offer to escort her through the prison, so she is often forced to walk alone, past numerous prisoners on the corridors. ‘At first it was a bit unnerving but I soon got used to it,’ she says with characteristic panache. Some inmates glance at us suspiciously as we pass by; others call out mockingly.

When at last we arrive in the colourfully decorated suite, I learn from several inmates about the horrific reality of daily life here. Prisoners are locked up in overcrowded cells for 18 hours a day, permitted to roam the courtyards from 9am to noon, and again from 2 to 5 pm.

The facility is designed to accommodate 1,800 men but currently holds 2,583. Not surprisingly, violence is common. Convicted robber Arnaldo León Arrigada (pictured above) rolls up his t-shirt to reveal numerous scars on his body. ‘I’ve been in several fights,’ he says impassively. ‘The guards rarely get involved because they don’t want to get hurt.’

All of the prisoners I spoke to were grateful for the chance to participate in Proyecto Importa. Nelson Gonzalez (previously of San Miguel and serving 15 years for robbery) has experienced prison life in four separate facilities and tells me opportunities for rehabilitation are scarce. ‘I’ve seen a few workshops which prisoners have set up themselves, but this is the only one which offers us psychological and practical training to prepare us for the outside world.’

Conditions at Colina II are consistent with a 2012 report from Human Rights Watch which describes Chilean prisons as ‘deplorable’. The report goes on to claim: ‘Sanitation, ventilation and nutrition are poor and potable water insufficient. Despite conditions conducive to ill-health and the spread of infectious disease, access to medical care remains inadequate.’ In February, two inmates at El Manzano II prison in Concepción died after contracting the rodent-transmitted Hantavirus.

Equally damning are figures from the International Centre for Prison Studies (ICPS) which reveal Chile still has the highest rate of prisoners per capita in Latin America at 283 per 100,000 people.

The government has worked to reduce overcrowding, building new facilities, deporting hundreds of foreign prisoners and releasing low-risk prisoners. But on average jails remain 33 per cent over capacity, and numerous human rights activists argue that figure is likely to increase because structural flaws in the penal system have not been addressed.

Hernán Vergara, president of Amnesty International Chile and human rights lawyer, tells me that alternative, non-custodial punishments such as community service for first-time offences will be required if Chile’s prison population is to be permanently reduced. He concedes, however, that such a policy would prove unpopular in one of Latin America’s most socially conservative countries: ‘Nobody has the political will to resolve the issue at a structural level,’ he laments. ‘The prevailing cultural attitude is that the prisoner should rot in jail and shouldn’t be given a second chance, so alternative punishments are frowned upon.’

However, his proposals are supported by the findings of a study into Chile’s rates of recidivism from Adolfo Ibáñez University. The study found that 50.5 per cent of convicted criminals who had served custodial sentences reoffended, compared to only 19 per cent for those who had completed supervised community orders. Furthermore, the percentage of first-time prisoners who reoffended upon release was a staggering 71.2 per cent.

Among those leading the campaign for penal reform is Cesar Pizarro who lost his 22-year-old brother, Jorge Manríquez, in the San Miguel fire. Shortly after the tragedy Pizarro brought together a group of family members known as ‘81 Razones por Luchar’ (81 reasons to fight). The group successfully petitioned the government to erect a memorial plaque outside the prison gates last year, and on the eighth day of every month organize peaceful demonstrations there.

On Friday 7 December they will head to San Miguel once more, where they will hold an overnight vigil marking the second anniversary of the tragedy, and protest against the government’s lack of action.

On an emotionally charged evening outside San Miguel in November, as scores of weeping mothers lay flowers beside photographs of their deceased children, I asked Pizarro what he thought should be done to improve Chile’s prisons. His message to the Ministry of Justice was banal yet urgent:

‘It all starts with education. The Ministry of Justice should invest in rehabilitation rather than degrading prisoners, treating them like animals.’

The problem is not peculiar to Chile. Last March, the British Foreign and Commonwealth Office Minister for Latin America, Jeremy Browne, visited Santiago and was given a tour of San Miguel (now a refurbished women’s prison). Shortly afterwards, Browne released a statement expressing his admiration for Chile’s penal system: ‘We have the same problems in Great Britain that the Chilean penitentiary system has…We are considering the same methods and approaches as Chile for reducing overcrowding in jails and reducing the delinquency rates.’

Of all the countries the British government could turn to for inspiration on penal reform, Chile seems a transparently odd and disturbing choice.
Current Affairs Features International Affairs Investigations Prison and Crime Social Justice Special Report