The next chapter: Santiago, Chile 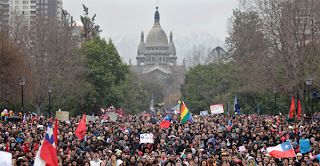 Having spent the last year studying to be a journalist, I will fly to Santiago tomorrow for what I hope will be a six month journalistic adventure to a country I have visited only once before (briefly in 2008). In truth I do not know what to expect from my journey, so I am trying my best not to expect anything at all.

It is certainly an exciting time to be travelling to Chile as a journalist, with civil unrest at its highest in years. Some opinion polls rank centre-right president Sebastian Piñera as the least popular Chilean president since the restoration of democracy in 1990. Piñera’s free market policies have attracted criticism and anger from many Chileans who feel disenfranchised, despite the country enjoying significant economic growth and falling unemployment rates.

Meanwhile regular protests from students demanding free education from the government recently culminated in 200,000 people marching through the streets of Santiago. High school classrooms across the capital are being occupied by students whose demonstrations are frequently met by violent police resistance. At a time when press freedom is being increasingly curtailed – with journalists being arrested for peacefully covering demonstrations - the role of the independent journalist is more important than ever.

This blog will be used as a platform to display my work during my time in Chile. I hope that by the time I have finished I will have a far richer understanding of the country’s culture, history and society than that which I have been able to glean from literature.

Popular posts from this blog

Most people are able to place a small bet once in a while without suffering any real consequences beyond losing a tenner. However, for a small minority, gambling can become a serious addiction with the power to destroy lives.
In the UK, it’s estimated that around 350,000 people suffer from an addiction to gambling – recently classified as a disorder in the latest edition of the Diagnostic and Statistical Manual of Mental Disorders(DSM V) – and those numbers are growing.
Last week the Guardian hosted a debate in collaboration with Discuss, where two expert speakers debated whether or not gambling is now out of control. Here’s what they thought:
If members of the audience were in any doubt about the potential for gambling to cause harm, few remained unconvinced after hearing the first speaker, Paul Buck, recount his personal story. Buck who is the founder of EPIC, a problem gambling consultancy, began his career in retail shortly after graduating …
Read more

Over the past few years I have had the privilege of working as a freelance journalist, covering issues which I care about - from miscarriages of justice to disability rights - for numerous publications. I have thoroughly enjoyed this experience and have learned a great deal from researching social issues and interviewing fascinating people. Unfortunately, during the last few months I have been unable to write as much as I would have liked, owing to commitments related to a career transition.

Through my writing I have become increasingly interested in labour issues, including youth unemployment, graduate prospects, worker instability, the growth of freelancing and self-employment. This interest has led me to pursue a second career as a consultant, helping students in higher education to navigate the challenging and often confusing world of work as they plan their future careers.

My experience of learning Chinese

I am often asked by friends and acquaintances why I decided to learn Chinese. There is no simple answer to this question. However, in this post I will attempt to summarise some of the main reasons and describe my experience of joining an estimated 200,000 Brits as a student of the world’s most spoken language.

I started working at the University of Leeds two years ago, following a career transition. Having moved to a new city I was looking for things to do which would enable me to meet new people in my spare time. I noticed that the Business Confucius Institute (BCI) were offering Chinese evening classes on the university campus and, together with a friend who had also recently moved to the city, decided to sign up to a beginner (level 1) class.

This initial decision was made on a whim – there were no grand career ambitions, set goals or plans to travel to China in the immediate future. Part of my attraction to the challenge o…
Read more