Mexico’s President- elect Enrique Peña Nieto met with Chilean President Sebastián Piñera on Friday in Santiago, where he spoke of his ambition to strengthen economic ties between the two countries. 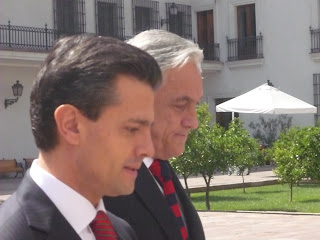 “Chile and Mexico have always had a close friendship, which in recent times has allowed us to sign several pacts facilitating trade and strengthening our economies,” Peña Nieto said. “Going forward we have new opportunities to strengthen our commercial relationship through our shared mission of driving toward economic growth and development.”

Having already visited Brazil, Colombia and Guatemala, Peña Nieto — leader of the centrist Institutional Revolutionary Party (PRI) — also met with Chilean business leaders in the morning prior to his arrival at La Moneda.
Chile and Mexico are members of a recently-formed trade bloc known as the Pacific Alliance which aims to deepen joint economic relations and increase trade with Asia.

With the two countries enjoying strong economic growth in recent months, both leaders also talked of the importance of using their wealth to eradicate poverty.

“Chile has one of the best records in the region in fighting poverty and we are united in our goal to eliminate the causes of poverty which sadly still exist,” Peña Nieto said.

Piñera is keen to promote poverty as one of his government’s main concerns, although his administration’s claim that one in every four people have been lifted out of extreme poverty since he was elected was staunchly challenged earlier this month.

The government insisted the numbers were certified by the United Nations' Economic Commission for Latin American and the Caribbean (ECLAC), but the organization has since publicly distanced itself from the data.

Before concluding the visit, the Chilean president reiterated his desire to work closely with Mexico, and wished Peña Nieto good luck in his future role as President of Mexico.

“Enjoy your two months off because you will miss them when you are president,” Piñera said.

Peña Nieto intends to visit Argentina and Peru before completing his South American tour. The president-elect will be officially sworn in Dec. 1.
Current Affairs International Affairs