Miscarriages of justice: 'a bit 80s'?

(Originally published by The Guardian and The Justice Gap) 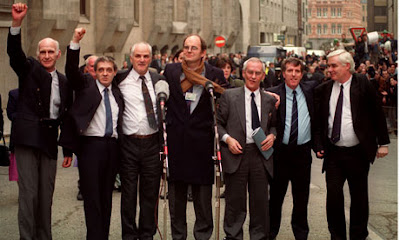 When the investigative journalist David Jessel heard in 1999 that Channel 4’s Trial and Error would be axed on the grounds that miscarriages of justice ‘are a bit 80s’, he wasn’t the only one to feel dismayed. The programme’s demise, along with that of Rough Justice, left a huge gap in the investigation and coverage of potentially wrongful convictions which arguably has never been filled.

Last week David Jessel joined an impressive panel of experts, lawyers and journalists at Manchester’s BPP law school, to take part in a public debate aimed at reigniting an interest in the failings of our criminal justice system.

Hosted by www.thejusticegap.com, the debate was prompted by the collection of essays – Wrongly Accused: who is responsible for miscarriages of justice? –

One of the main focuses of the night was to discuss whether the Criminal Cases Review Commission, the independent body set up in 1997 to refer potential miscarriages of justice to the Court of Appeal, is fit for purpose.

At the centre of the panel sat the current chair of the CCRC, Richard Foster, surrounded by seven speakers whose criticisms of his organisation ranged from moderate to vehement. First to speak was the Guardian’s prison correspondent Eric Allison who set the tone for the evening by expressing his concerns that miscarriages of justice are on the rise, citing cuts in legal aid and prejudicial pre-trial publicity as crucial factors.

‘I’m convinced there’s been a massive increase in the number of miscarriages of justice. I’m currently researching five cases as I’ve got no time to do anything else, but there are 100 more I could pick up tomorrow that need examination.’ Eric Allison

David Jessel, who has worked as a commissioner for the CCRC, reiterated Allison’s concerns and spoke of a need to get miscarriages of justice back on the public radar.

‘What is essential is to revive that sense of outrage and imagination that we had in the past, to have the imagination to think what it must be like to suffer a miscarriage of justice. It’s that concern that guarantees the integrity of the system.’

However, others, including Manchester University lecturer and former CCRC commissioner Dr Hannah Quirk, appeared to be more optimistic about the state of the criminal justice system.   Dr Quirk said: ‘It’s important to keep a perspective on this. Cases are being referred to the court of appeal, they are being investigated and far more people are having their convictions quashed than ever could have been in the 1980s.’

One of the highlights of the event came when Susan May, a woman convicted of murdering her elderly aunt 20 years ago, was invited to address the panel. Considered by many to be a miscarriage of justice victim, May has substantial experience in dealing with the CCRC  which has referred her case to the court of appeal twice and is currently considering fresh evidence that could result in a rare third appeal.

May said: ‘I do believe the CCRC has changed the way it operates. When I first dealt with the CCRC in 1997, my caseworker came to see me in prison quite a few times and I think I’m right in saying that doesn’t happen now…After 15 years I really think we need a review of the CCRC.’   She further criticised the Commission for ‘second guessing’ the Court of Appeal by only referring cases deemed to have a ‘real possibility’ of resulting in a quashed conviction.

Responding to May’s assessment, CCRC Chair Richard Foster cited cuts in funding as the primary reason for having less face to face sessions with applicants: ‘Our budget has been frozen for the last six years so in real terms we have 33% less money than we did six years ago…and that’s why we can’t do as much face to face as we’d like to do.’

When asked to explain the Commission’s low rates of referral Foster told the audience that around half of the applications they received were inappropriate for consideration, citing civil cases as an example. With this taken into account the actual percentage of applications referred was closer to 7% than the often quoted 2%, he argued.

But defence lawyer Campbell Malone disagreed, insisting that the CCRC does not refer enough cases and cannot be held to account: ‘The CCRC have never been bold enough… the truth of the matter is most people will accept that they are too cautious. The problem is there isn’t any real way that I’m aware of that those cases where they [the CCRC] have got it wrong can be audited and checked.’

Where the speakers reached a consensus was in agreeing that the CCRC should be reformed rather than abolished, a point which Dr Quirk summed up well: ‘It’s important to acknowledge there are problems with the system, to try and improve it. Let’s make it better but let’s not become completely despairing about it.’
Current Affairs Prison and Crime Social Justice