(Originally published on The Guardian) 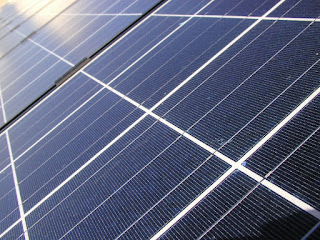 The current Feed-in-Tariff (FiT) of 43p per kilowatt-hour, paid to people in Britain for generating electricity through solar panels, was originally due to be cut to 21p from 1 April 2012.

However, last October the government announced the new tariff would come into effect for all solar panels installed after 12 December 2011, causing anger and confusion within the solar industry.

In March the Supreme Court's ruling that the cuts were unlawful was well received by solar companies, many of which had already invested in solar energy with the original tariff dates in mind.

And they were not the only ones celebrating. On Sunday a group of activists convened in St John’s Centre, Old Trafford, for the official launch of St John’s Sunshine (SJS).

Comprised of Rev. John Hughes and three other founding members, SJS is an unusual collaborative project which aims to harness the sun’s energy for the benefit of the community.

The idea behind the scheme was the product of a chance meeting between Hughes and activist Fiona Nicholls in spring 2011. Hughes had long considered the possibility of installing solar panels on the roof of his church but was unsure how to proceed.

Together with local campaigner Pete Abel and business consultant Gavin Wood, they concocted a plan to create the ultimate solar energy community scheme – run by the community for the benefit of the community.

They would install solar panels on the roof of St John’s church and use the money generated from the Feed-in-Tariff to fund local projects. The scheme would be run as an enterprise with all the profits going towards a ‘Sunshine Grant’ from which local schemes would be funded - from environmental ventures to youth projects. Crucially, members of the community would be invited to invest in the enterprise giving them a democratic say in choosing which proposals the grant would pay for.

With the 43p/KWH tariff fixed for 25 years for projects beginning before April 2012, the team estimated they would receive a minimum annual income of £1350. Installation costs were estimated at £15,000 so in the long run it appeared to make perfect financial sense.

But in October the government suddenly announced the FiT would soon be slashed by half from December, throwing their plan into uncertainty.

“The announcement was disastrous for us. One of the main problems was that it would have meant a massive cut – about 55% of our income stream would just disappear. For any organisation to try and recover from such a huge cut is almost impossible.”

A long legal battle ensued after Friends of the Earth and two solar companies applied for a judicial review. Several appeals later, the Supreme Court’s ruling in favour of the solar industry represented the green light

SJS had been hoping for.

“It was a huge relief. Despite the government’s announcement we planned to go ahead with the project anyway but the ruling means we will have twice as much money to give back to the community in grants.”

“It’s a great scheme which brings together a very strong community project with a strong environmental project. I hope lots of people will get involved as investors and volunteers and will benefit from the way the community grants are decided and spent.”

SJS are now concentrating on attracting investors to buy shares in the enterprise and help pay for the installation costs.

With no further legal obstacles anticipated, the future is looking sunny for St John’s Sunshine and the Old Trafford Community.