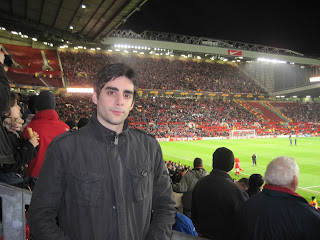 In the context of world football Manchester United vs. Athletic Bilbao was not considered an especially important fixture. For me, however, it was hugely significant. This was a match I had been waiting to see for as long as I could recall, with both clubs representing two sides of my mixed heritage and competing for my support.

Raised in Manchester, I had grown up a United supporter, but through my mother’s side of the family also qualified as a fan of Athletic Club. Supporting Bilbao was neither fun nor fashionable, yet despite their limited success family members would often remind me of their merits; their policy of signing only Basque players, their record number of ‘Copas’ (Spanish FA cups), the fact they have never been relegated from the top tier of Spanish football.

The morning of the match I went to Old Trafford to interview Athletic fans. I asked for their thoughts on the match, its historical significance and their impressions of Manchester. Nobody I spoke to was old enough to remember the last time these two teams met in 1957, but everybody remembered the date. Played over two legs, United won with an aggregate score of 6-5, though several Athletic supporters preferred to remember the score in the first leg: “It was a legendary occasion”, said one fan, “We’ve heard a lot about those matches, especially the first leg which we won 5-3 at San Mames.” 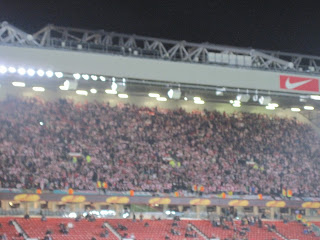 On Manchester, the consensus appeared to be that while the city has much to offer culturally, food is not among its strengths. This is hardly surprising given the extent to which the Basques pride their rich and famous culinary scene. “You might beat us at football, but you’ll never beat our food”, one man quipped. It would later emerge we can’t beat them at either.

In the afternoon I was invited to give an interview at BBC Radio Manchester to explain my unusual relationship with both clubs and give a brief pre-match analysis. I made two predictions - United to win 2-1 and the young prodigy Iker Muniain to score for Bilbao - only one of which materialised.

Seated in the North Stand that evening the atmosphere was beyond anything I have previously experienced at a Old Trafford. My position between the two most vociferous sections of the crowd – the Stretford End and the away stand – could hardly have been more apt, and though the home fans far outnumbered the Basques they were out-voiced from the start (see video below). As chants of “Athletic!” rang around the stadium I was reminded of the first football match I ever went to some 11 years ago at San Mames. On that occasion their opponents were Alavés, another Basque side, and the crowd sang with a fervency I hadn’t witnessed again until this moment.

Driven by their star players Muniain and Fernando Llorente and aided by the intensity of their support, the Basque underdogs skilfully outplayed United. This was football as it should be played. It had everything; pace, flair, crisp passing, chances at both ends and goals of rare beauty as both teams attacked relentlessly. The pinnacle moment came in the 90th minute, when Muniain  raced into the area with impossible speed to strike the ball past de Gea into the roof of the net. At 3-1 up the away fans reacted with deafening delirium, and though Rooney would pluck one back for the reds it proved insufficient as the Basques triumphed 2-3.

As thousands of United fans trudged away at the final whistle, it emerged that hundreds of the people seated around me had in fact been closeted Bilbao fans all along. No longer able to contain their joy I watched in amazement as they broke into song, hugging one another and jumping up and down ecstatically. Many tore off their coats and jumpers to reveal Athletic t-shirts and scarves hidden underneath.
Armed with a Dictaphone I approached them for their reaction.

“It’s beyond words”, cried one, “to see Athletic play that well against Manchester United, a great team, I can’t describe it…”

“I thought it was going to be a much more difficult game”, said another gleefully “I can’t believe we played so well!”

Leaving Old Trafford the people of Bilbao took the party to the streets of Manchester in their decidedly boisterous – though never threatening – style, to celebrate a night they would never forget.

The following day I reflected on the match and Bilbao’s incredible performance. It is to their credit that Athletic boasts an enviable squad full of young talent which has been nurtured by the club over a number of years. It is sad to think that many of their best players will probably be gone by September, poached by richer sides who dominate the monopolised world of football. But it is also refreshing to witness the affinity which their fans clearly have with the players, almost all of whom were born in the region, and none of whom behave in that spoilt child, materialist manner which has come to define the modern day footballer.

Many United fans have since spoken with warmth of their brief encounter with the Basques. At the time of writing it is possible Bilbao may play Manchester City in the semi-finals of the EUROPA league. For reasons not limited to football it is to be hoped that they return.

tonis said…
Thank you for welcoming us. We had tremendous fun in Manchester and really look forward to playing Man Utd again. Not so sure about City...

I was one of the so-called "Operation Chameleon". I had Utd scarf, cap and ear muffs, but an Athletic top under the coat. Luckily, one of the stewards was relocating Athletic supporters from the lower east stand to the corner, so I asked and my prayers were answered. I shouted, laughed, cried, and sang my heart out.
14 March 2012 at 08:39